Major was established in Melbourne in 1912 as a motor vehicle sales and service company, and graduated into the field of designing and manufacturing burner equipment for the disposal of waste motor oil. From this humble beginning Major was soon manufacturing simple oil fired forge and heat treatment furnaces.

By the mid 1920’s S.E. Major Motor and Engineering Pty Ltd had come to the fore as designers, manufacturers and suppliers of a wide range of furnaces and combustion equipment.

During the Second World War the demand for sophisticated metallurgical furnaces in Australia grew. Major established themselves as the only reliable source of supply for such equipment.

During the 70’s Major signed key license agreements with Selas Corporation of America, and Ajax Magnethermic from the USA and supplied two large continuous steel strip galvanising lines to BHP Western Port Victoria. At this time Major also developed the technology and began to manufacture ovens for curing lacquered tinplate sheets for the canning industry, and the manufacturing capability for aluminium melting and holding furnaces.

In 1986 Major was awarded significant large scale contracts for the design and supply of an 80 tonne capacity aluminium tilting furnace for Portland Smelter Services and later, the No 6 continuous Annealing and Galvanising Line for BHP at Western Port, Victoria.

In 1990 Major developed a new generation furnace to enable it to re-enter the Australian Cremation market. Subsequent development has produced models to meet the differing requirements of the International Markets

Throughout the 90’s Major continued to expand its capabilities through sales and technology transfer agreements and its specialized manufacturing capability.

Since then, the company has expanded its service and spare parts divisions with the addition of new service personnel, products and services in combustion, refractory, lubrication, pollution and dust control and profile cutting and wash grinding services.

During the 2000’s, Major continued to be a key supplier to the local steel industry and crematoriums and in the 2007-09 years, Major won large export contracts in Quebec, Canada to supply twelve (12) large Tilting Rotary Furnaces to process solar grade silicon and multiple orders with BlueScope Steel for equipment to process their new generation 3 Zincalume ® product.

February 2012 saw the centenary of the business, this occasion was celebrated with a gala dinner at the Melbourne Cricket Ground and the unveiling of the Major 100 Year Timeline below.

In 2015, Major acquired Filtaire Products, an engineering and manufacturing business supplying pollution and dust control equipment. This acquisition opened new markets for Major with new and complimentary products and capabilities in the bulk materials handling sector.

In 2017, Major was awarded the Victorian Manufacturing Hall of Fame Medium Business of the Year, a great achievement for the company.

Then in early 2018, Major acquired a profile cutting and wash grinding business, Die Cut Engineering. This acquisition further established the vision of a diversified engineering business with a broad client base. 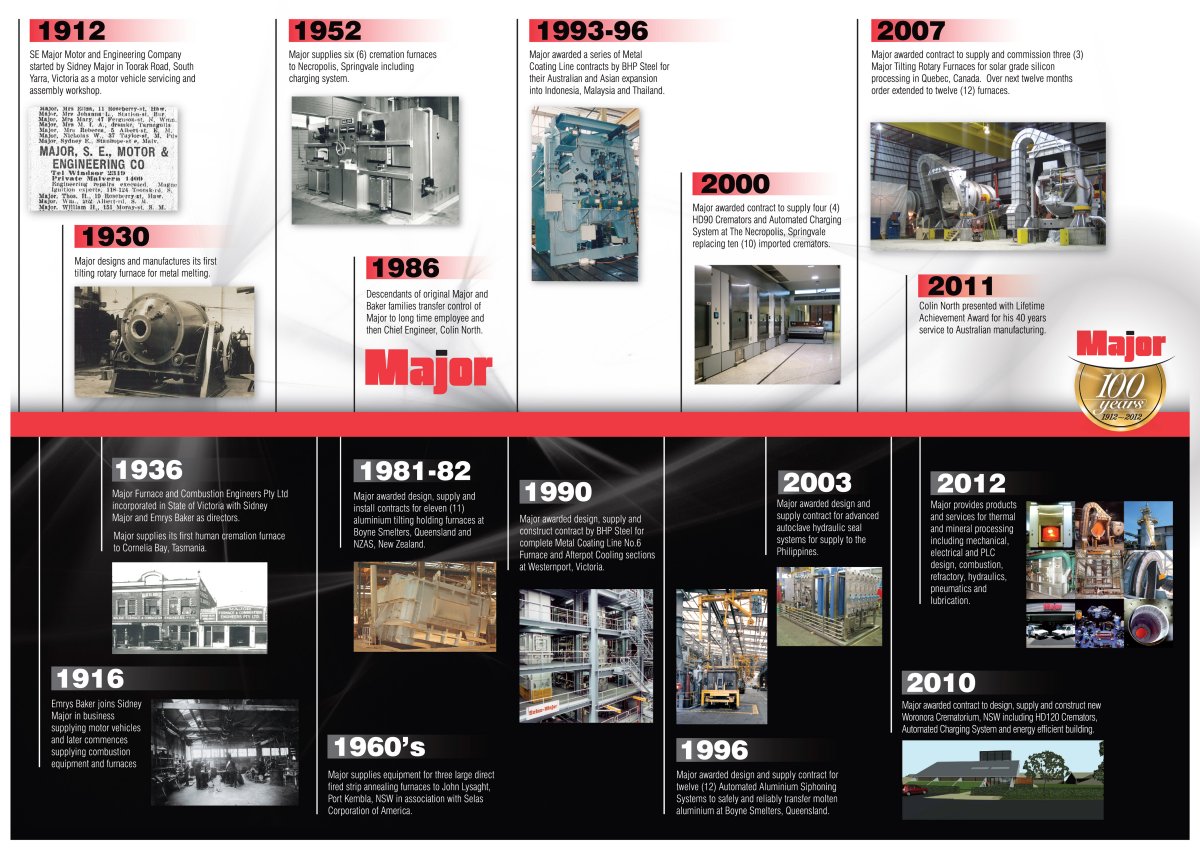